The Land at 52 Merthyr Road – A Changing Scene 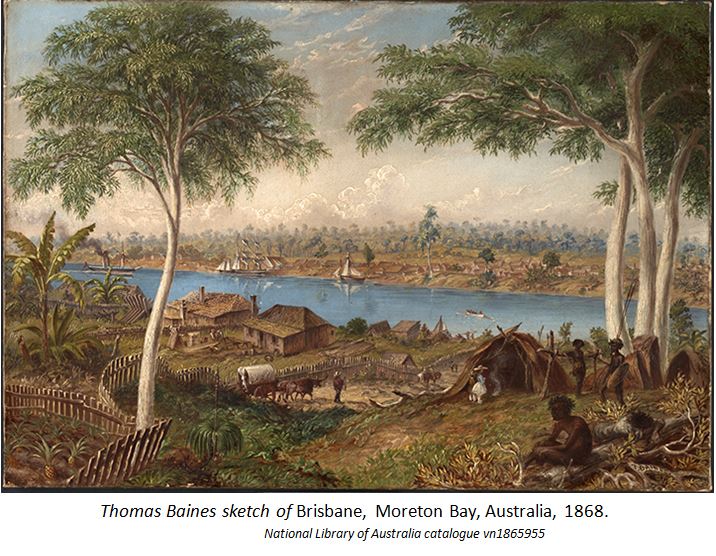 Each Sunday, members of the congregation known as Pilgrim People Brisbane worship in the Merthyr Road Uniting Church on land long inhabited by the Turrbal people before the arrival of Europeans. Since then, the property at 52 Merthyr Road has been used in a variety of ways. 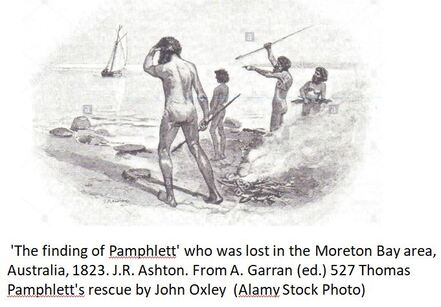 Turrbal Country
The Turrbals occupied the area of land extending far inland to the Gold Creek or Moggill, as far north as North Pine, and south to the Logan River. The part now known as New Farm was Binkinba, a place of the land tortoise. Little is recorded about these indigenous people. We form some idea of their livelihood from Europeans who were associated with them in the nineteenth century. Convict John Finnegan and two ticket of leave convicts, Thomas Pamphlett and Richard Parsons experienced their help and kindness in 1823 when they were trying to find their way back to Sydney after losing their bearings as the result of shipwreck.
​​Tom Petrie (1831 – 1910) was an explorer, gold prospector, logger and grazier. When he was a boy he mixed freely with Aboriginal children, shared in their activities and learned the Turrbal tribal dialect. His lasting friendship with Aboriginal peoples and his wealth of knowledge about their culture and customs meant that he was in constant demand to accompany exploration expeditions. He remembered going with his aboriginal friends catching tortoises in the swamp at New Farm.[i]

[i] Thomas Petrie, The Queenslander, 31 August 1901, p 436
A New Farm and Land Division
In 1827/28, soon after the establishment of the Moreton Bay penal settlement, more land was required for the growing of corn, vegetables and fruit so the area known as the ‘new farm’ was developed. Around 240 acres at the lower end of the New Farm Peninsula was established to supply food for the growing settlement. Surveyor Dixon surveyed the New Farm area in 1839. Merthyr Road was part of the Moraybank estate, first made available by auction in 1881. The land bounded by Moreton Street, Merthyr Road (then called Racecourse Road), Bowen Terrace and Abbott Street was advertised: “Most of the lots command charming views of the Brisbane River, and the grounds and residences on both banks of same. The sea breeze reaches all without check, the flat open land to north-east extending to the river, formerly the Racecourse, permitting its free approach.”[ii] 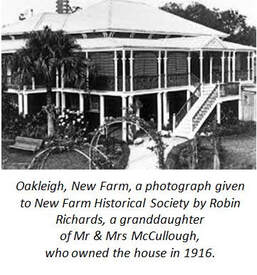 Oakleigh
In the late 1880s, a magnificent wooden house was built on the property at 52 Merthyr Road. Named Oakleigh, it had verandahs on three sides and a double staircase at the front. It was the home of the noted Brisbane architect, Claude Chambers from 1901 to 1915. Among his many contributions to Brisbane architecture was his organisation during 1901-2 of a competition to design a new Presbyterian church on property at the corner of Creek and Ann Streets. Claude Chambers had been appointed professional assessor by the Building Committee of Wickham Terrace Presbyterian Church faced with the task of replacing its beautiful gothic building on land needed by the Railway Department to build a tunnel from Central Station to Fortitude Valley. Conditions were quite detailed. They included seating accommodation for 500 adults and aisles sufficiently wide to seat an additional 200 should occasion arise. Sufficient additional room was to be provided for organ, choir of forty adults, minister’s and choir vestries. A tower was recommended at the corner of Creek and Ann Streets but no galleries were permitted under any circumstances. The building was to be bold in character.[iii] From fifteen entries by Brisbane architects, the progressive and strikingly original design of George David Payne was chosen. He later supervised the construction of the new church – now St Andrew’s Uniting Church and still an architectural highlight in the city of Brisbane.

​David Valentine McCullough, an active member of the real estate business in Brisbane, his wife and family were next to live at Oakleigh. Mrs McCullough was a sister of Claude Chambers.
​
Dr Harry Windsor and his family were the owners in the 1920s. Dr and Mrs HJ Windsor supported the Christian Brothers whose jubilee garden party was conducted in the grounds of Oakleigh in August 1925. The Mayoress of Brisbane, Mrs Barry, was among the many guests. The program of music and recitation included items by the Nudgee College Boys’ Band.[iv]

Oakleigh became a guest house in the 1930s. While Mrs NG Hughes was proprietress it was advertised as Oakleigh Private Hotel, offering superior accommodation with every convenience, “nice grounds, tram to gate.” [v] 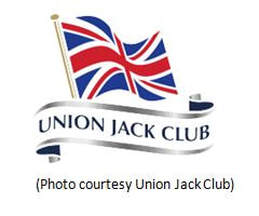 During World War II this two-storeyed building with roomy garden was used by the Union Jack Nurses Club providing accommodation and meals for 35 nurses of the Australian Army and allied forces while on leave.

​​Duchesne College
In March 1947, Oakleigh became Duchesne College, a University of Queensland residential college for catholic women when it was opened by Archbishop Duhig. Another building named The Acorn was erected at the back of the main house and later an adjoining property was purchased on which Little Oak was built. The College was conducted by the Sisters of the Sacred Heart and 25 country students were accommodated. Social events such as the college ‘At Home’ evenings and college appeals were held frequently. Lady Lavarack visited on one such occasion. The college common room was decorated with balloons and streamers for dancing and entertainment. Duchesne College moved to the new University of Queensland St Lucia campus on 12 December 1958. 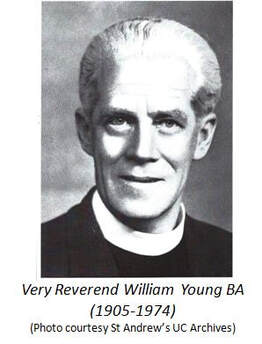 New buildings were erected – a manse for the use of Rev Young, a dining hall and kitchen, a recreation room and garages.

In 1960, the large hostel kitchen where breakfast and dinner were prepared each day for the residents was considered to be an ideal place to arrange meals for the first ‘Meals on Wheels’ operation in Brisbane. Mr William Jack, grandfather of Lee Carnell and her brother Ian Carnell AM, gave valuable voluntary assistance in the early days of the project. 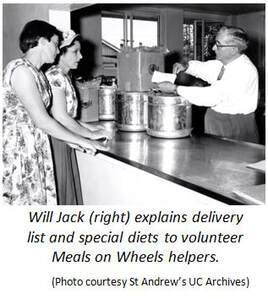 ​It was to lead to the provision of this community service by other churches and organisations but for eight years St Andrew’s was the only such service in Brisbane. Hostel cooks put together the meals and a team of volunteers (drivers and assistants) delivered them to elderly people in the community in need of such assistance from Monday to Friday each week. The recipients of the meals contributed two shillings (20 cents), increasing to four shillings (4/-) per meal in 1973. During the 13½ years’ operational period, 329,000 meals were served.

​In later years, the need for hostel accommodation declined and St Andrew’s Hostel ran at a loss. The hostel closed and the property was left vacant for some time. During this time a fire damaged much of the original timber building Oakleigh. 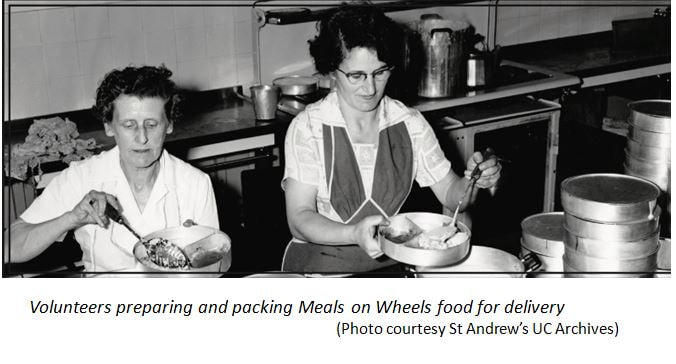 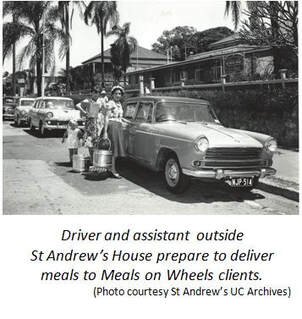 ​St Andrew’s Meals on Wheels was to lead to the provision of this community service by other city churches and organisations but for eight years St Andrew’s was the only such service operating in Brisbane.

Hostel cooks put together the meals and a team of volunteers (drivers and assistants) delivered them to elderly people in the community in need of such assistance from Monday to Friday each week.

The recipients of the meals contributed two shillings (20 cents), increasing to four shillings (4/-) per meal in 1973. During the 13½ years’ operational period, 329,000 meals were served.

In later years, the need for hostel accommodation declined and St Andrew’s Hostel ran at a loss. The hostel closed and the property was left vacant for some time. During this time a fire damaged much of the original timber building, Oakleigh.
Uniting Church
In June 1977, the Methodist Church of Australasia as a whole, some Presbyterian churches and most of the Congregational churches in Australia joined together to form the Uniting Church in Australia. In immediate response, the three Methodist churches at Brookes Street, Brunswick Street and Kingsholme and the Presbyterian church in Warner Street united to become the Valley-New Farm Uniting Church Parish Mission.
About this time, the St Andrew’s House property at 52 Merthyr Road, New Farm was on the market and an offer of $165,000 had been refused. Because of the potential of the site for church purposes, the property was withdrawn from open sale. In December 1977 it was made available to the newly formed Parish Mission at a cost of $63,000. It was decided that the existing buildings connected with the former Methodist and Presbyterian churches/missions would be sold in stages and a new complex would be built for the Uniting Church in Australia on this newly acquired property.

Work towards this new goal soon began. The sale of the former Valley Methodist parsonage at 53 Brookes Street (Epworth Lodge) was finalised and this financed the acquisition of the 52 Merthyr Road property. Because of the extensive damage to Oakleigh, it was decided to clear the entire property with the exception of the dining hall, kitchen, the manse, the recreation room and garages. The building program commenced.

From the beginning of 1979, Sunday evening services of the Valley-New Farm Uniting Church Parish Mission[vi] were conducted in the Merthyr Road dining room. Services were held in the recreation room while the dining room was extended. The renovated hall was officially opened on 30th September 1979. Services of worship were to continue at the former Presbyterian Church in Warner Street, Fortitude Valley until 1988.

The former manse on the Merthyr Road property became the Parish Office and the office for the Valley-New Farm Family Day Care Service. The recreation room at the back of the property was used as a venue for playgroups for mothers with young children. The Family Day Care Toy Library was housed in the garages and in part of the Recreation Room.
The Brunswick Street and Kingsholme Methodist church buildings were sold to finance the building of a new church at Merthyr Road – a multi-purpose building incorporating the beautiful stained glass windows from the former Brunswick Street Methodist Church and a new Johannus organ imported from Holland. The new church was officially opened on 26 March 1983. The amalgamation of the former Methodist and Presbyterian churches and missions in the suburbs of Fortitude Valley and New Farm was nearing completion when in 1988, the former Fortitude Valley Presbyterian Church in Warner Street was closed and the congregation joined with the people worshipping at the new church at 52 Merthyr Road. ​

[vi] original name of the present Merthyr Road Uniting Church
​Significant renovations were undertaken in 1999 with the extension of the hall, renovation of the kitchen and the joining of the two buildings by way of a large covered courtyard which is now used by many groups as a place to enjoy food and conversation. Additional changes were made in 2020 and the church was rededicated by the Moderator of the Uniting Church Queensland Synod, Rev Andrew Gunton on 8 November 2020. 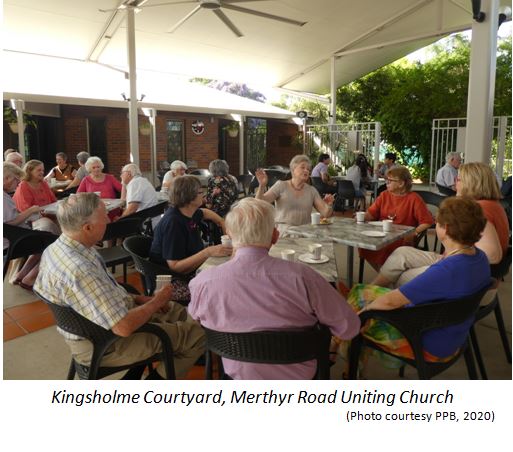 People have used the land at 52 Merthyr Road in different ways over the past 190 years - Turrbal country, farm land, a doctor’s residence, boarding house, university college, hostel, community church. We might wonder what will happen at this place in the days to come. Albert Einstein said, “The future is an unknown, but a somewhat predictable unknown. To look to the future we must first look back upon the past. That is where the seeds of the future were planted. I never think of the future. It comes soon enough.”[vii]

[vii] Albert Einstein, German-born physicist who developed the special and general theories of relativity and won the Nobel Prize for Physics in 1921 for his explanation of the photoelectric effect. 1879 – 1955 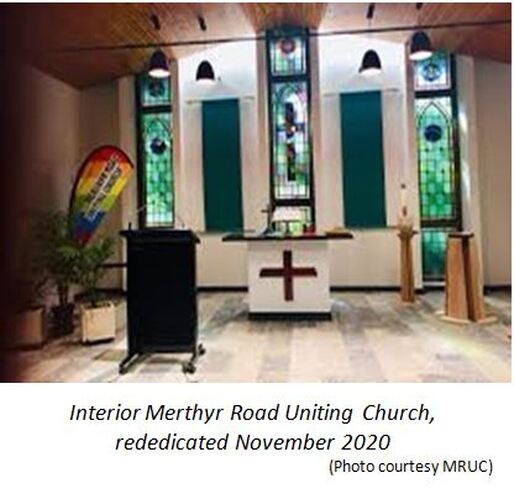 Acknowledgements
Sincere thanks to Desley Garnett and officers of New Farm and District Historical Society Inc for permission to use newsletters and articles for research for this document.